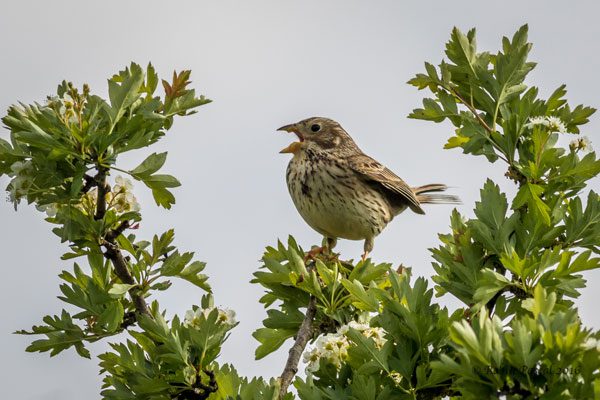 The UK Corn Bunting population declined by 89% between 1970 and 2004, and the species was included in Hampshire’s Biodiversity Action Plan for seed-eating farmland birds. One of the HOS actions in this Action Plan was to carry out a survey of the species’ distribution to bring our knowledge up-to-date.

Therefore, between May and July 2005 an attempt was made to carry out a basic two-hour survey in every tetrad that had held territorial Corn Buntings since 1986. Volunteers agreed to visit a total of 234 tetrads over the three months. The objective was to establish the presence, or absence, of the species rather than make a full assessment of its abundance. The species was found to have disappeared completely from many areas, and in some regular strongholds (such as SU61) they were found to be significantly scarcer than just five years previously. Full results are given in the 2006 Hampshire Bird Report.

A further survey of Corn Buntings was carried out in 2017. Focussed on the now reduced breeding distribution – mostly towards the border with Wiltshire. 56 tetrads known to have held territorial Corn Buntings since 2005 were surveyed, and birds were found in 29 of these, plus a further 2 that were they appeared to be new. Analysis of the data is still underway, but intense survey of 9 tetrads taking in all of the farms close to the villages of Martin and Whitsbury produced sightings from 105 points, and in the rest of the county there were 76 territorial males. This suggests that the population is holding up better than we had suspected.

A paper on the survey and its results appears in the 2017 Hampshire Bird Report.