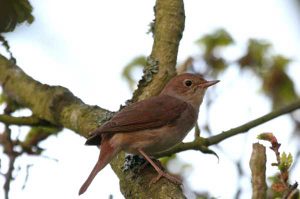 In 2018 HOS and HIWWT surveyors carried out visits to all recently-occupied sites. Reports of territorial birds showed yet another decline. Compared to 66 during the 2012 national survey, the overall decline was 85%. The stronghold remains Botley Wood/Whiteley Pastures with six territories although this was significantly less than the 11 recorded last year. The results of a county-wide survey in 2018 are included in the table below and given in a paper elsewhere in this report. This concludes that whilst there were 26 singing males in 18 tetrads, only between 6 and 14 were holding territories and of these only six were considered to be proved breeding.